Overview of the proposed Nave Garden

The figure below shows an overview of the layout of the site with both cloister and nave gardens. The plan below is illustrativeonly: 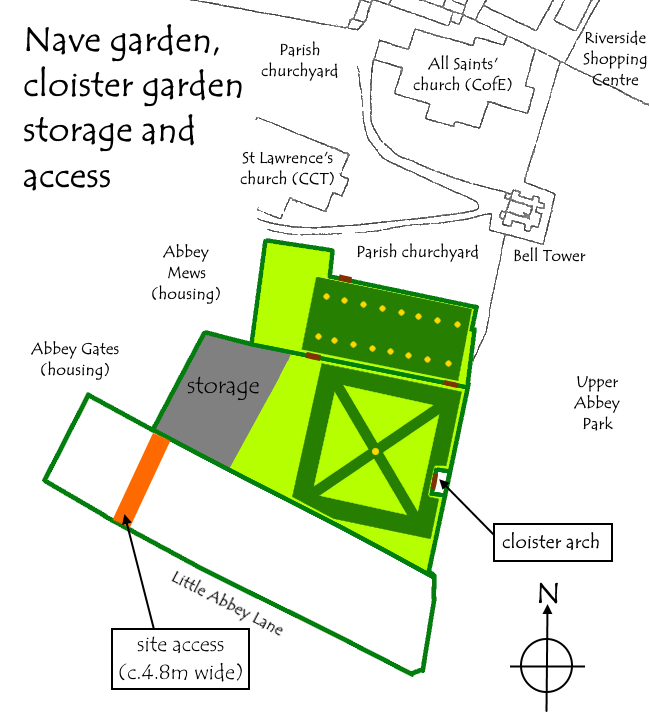 The figure below shows an overlay of the known archaeology on the Evesham Abbey site. The location of the piers can be readily seen. The green area enclosed is some 2,131 square metres:

Current thinking is to create a level and lawned area within the bounds of the post Dissolution walls, the green shaded area above. Whilst columnar trees were considered for planting on the site to depict the location of the nave pillars (and as they grow give a sense of the scale of the original nave) this now looks unlikely due to risk damage to the ground archaeology.

Public access into the Nave Garden is proposed via two routes:

Access from the Cloister Garden will require a ramp for disabled access as well as a short flight of steps. It is intended that the position of these access points will recreate the original doorways leading from the nave into the cloisters.

Access from the parish churchyard will be created by enlarging an existing gateway and inserting a new stone gateway (in the north-west corner of the site). In the late Middle Age it was customary for a newly-elected abbot to be received at the Norman Gateway, and conducted in procession to the abbey church, for formal installation.[1] The abbot would probably have entered the Abbey Church through a door at this point. This north door was opposite the 12th-century ‘graveyard gate’ which was the most convenient point of access from the town to the church.[2] The figure below shows the location of the north door of the Abbey Church: 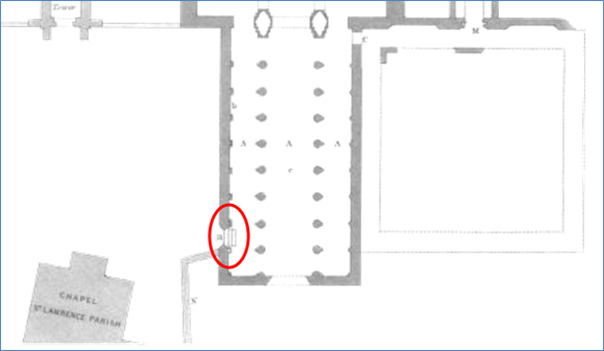 David Cox records that the doorway was in the second bay from the west and had a clear opening of 8.17 ft (2.49 m).[3] Its arch towards the churchyard had three orders, of which the outer two were supported on nook-shafts with narrow bases. He goes on to observe that: “There was nothing to suggest that it was other than the original doorway.” It is planned to recreate this entrance, currently a wooden doorway, as an exit from the Nave.

Interpretative panels will be added at specific locations to the site. There are already a number of such panels located in the parish churchyard and in Abbey Park. Arguably the style of these panels is a little dated, but they do have a “house style” which helps provide a sense of unity across the area.

The perimeter of the nave to include good quality wooden bench seating at selected locations. A number of wooden benches were installed in the parish churchyard in 2015 made of high-quality hard-wood. These might be used as a model for new benches in the nave garden.

The abbey nave was the normal burial place of the abbots [4] and some of these were uncovered in the 19th century excavations. Sculptural or planting could be used to commemorate or mark such burial places, or to mark the location and dedication of abbey altars and chapels (or, indeed, any other interesting finds from the archaeological work).