A key objective of the initial archaeology is to determine the archaeological potential of the site which comprises the following key abbey buildings:

The site being taken on by the Evesham Abbey Trust does not include the choir, chancel, crossing, eastern claustral range, or the transepts (all of which are under the grass in Upper Abbey Park). The scope and planning of any research archaeology project must take into account the security, access and significance of areas potentially available for excavation.

D.C. Cox, authority on Evesham Abbey and one of our patrons, wrote in 1990:

There is certainly significant scope for further archaeology on the site (little has been done since 1990); and Dr Cox has kindly offered to advise any and all such work.

Size of the Abbey Church

The site of the abbey nave is well delineated by post-Dissolution walls. This area, along with the chancel and chapter house, has been subject to previous archaeology. Based on the Rudge excavations (1811-1831), the antiquarian George May (1845) thought the Abbey Church extended “from east to west about 300 feet” with the following dimensions:

A number of abbey plans have been drafted based on this earlier work. In turn, these plans have inspired a number of artistic re-imaginings of the abbey. Unfortunately many of these plans and images include significant elements of speculation. This means that there is a lot of scope for new and revised understanding not only from initial archaeology (in the Conservation Project) as well as research archaeology. 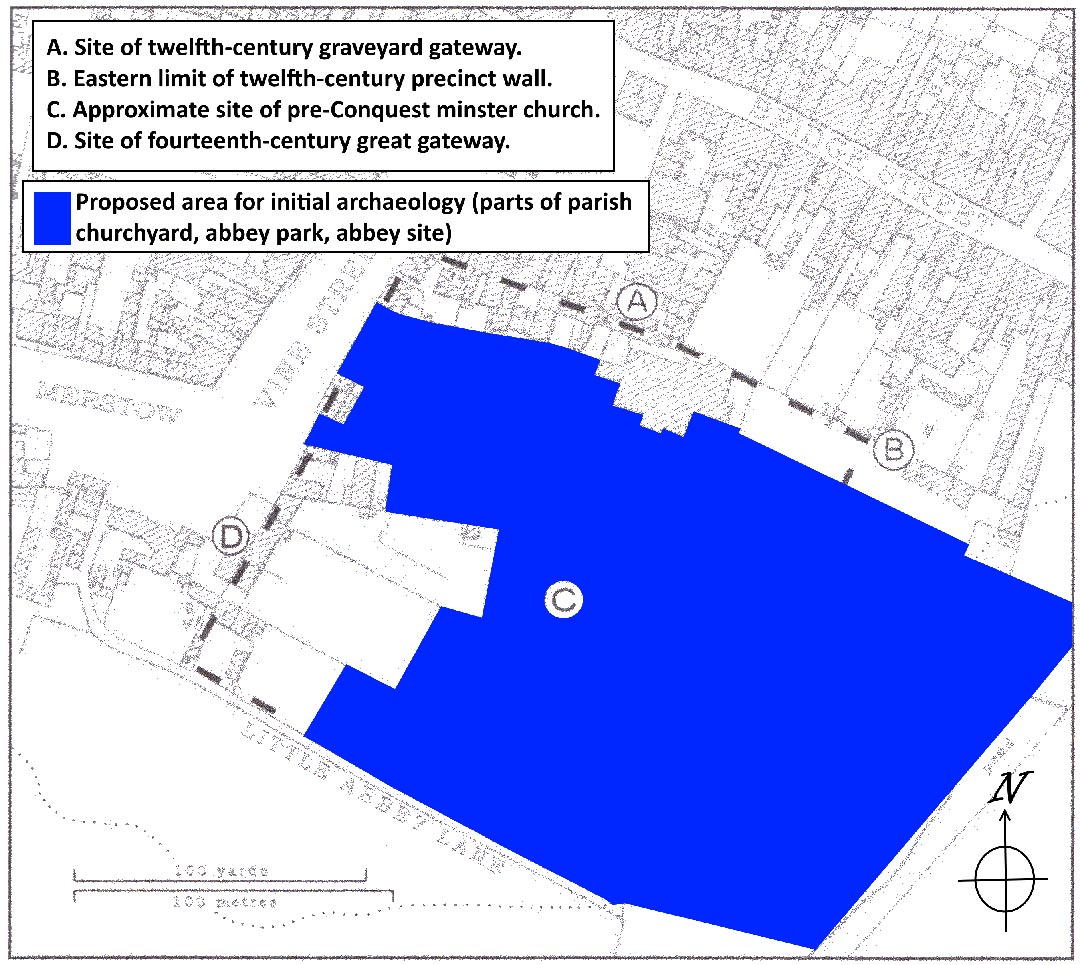 If the initial archaeology (including a desk-based assessment, archive research and on-site surveys) determines that the site has significant archaeological potential, and if the appropriate funding and approvals are obtained, then there are a number of questions which might be addressed:

Investigation of the chancel and eastern claustral range – which sit beneath the grass in Abbey Park – will require permission required from Wychavon District Council who lease the site from the Rudge Estate.

Non-invasive surveys of the parish churchyard will require approval by Evesham PCC. The digging of test pits or trenches will, by contrast, likely require not only approval by the PCC, but also formal faculty permission.

The scope, structure, objectives and timetable of any research archaeology project will be determined if there is considered to be sufficient archaeological potential on the site. If this work does go ahead, this will mean that the development of the Nave Garden, Cloister Garden and Abbey Grounds Garden will likely be delayed.

The trustees lack the experience and background in managing archaeological work. If this project goes ahead, then, it is expected that it will be organised and managed by a third party (perhaps a local university) with the full co-operation and support of the trust.