The Evesham Abbey site, together with parts of Abbey Park, is a Scheduled Ancient Monument (No. WT253). As illustrated in the figures below, this includes Upper Abbey Park, the allotments, the gardens of Abbey Gate, and a portion of the site occupied by the Riverside Shopping Centre: 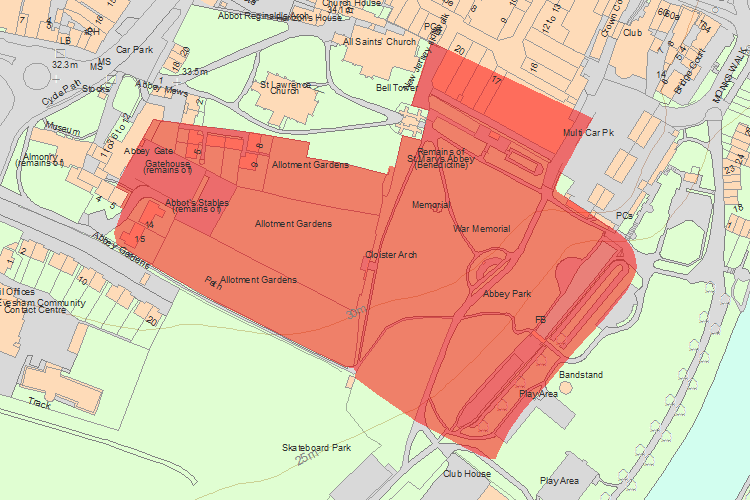 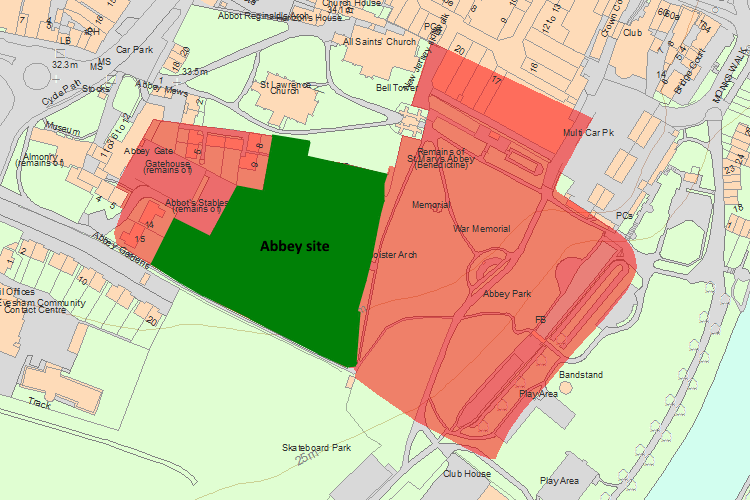 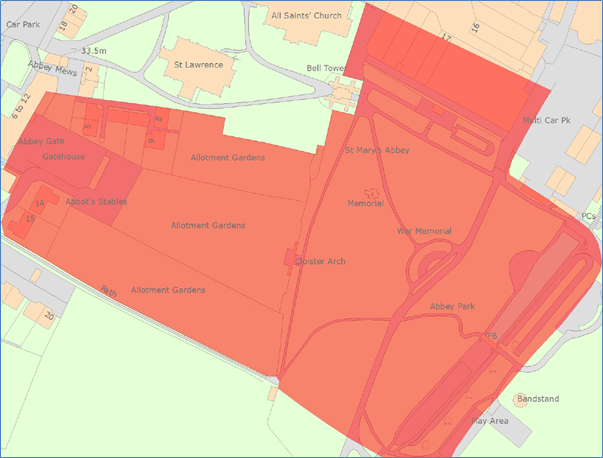 Statutory protection of the site

As a Scheduled Ancient Monument, the site of Evesham Abbey is protected under The Ancient Monuments and Archaeological Areas Act 1979. Any work will require Scheduled Monument Consent (SMC) from the Secretary of State for Culture, Media and Sport (DCMS).

Consent for works is granted by the Secretary of State and must be given in writing before works are started. Consent cannot be given retrospectively, and undertaking works before consent has been given is a criminal offence. The site is protected against ground disturbance or unlicensed metal detecting.

Moreover, it is a criminal offence to destroy or damage a scheduled monument either intentionally or through recklessness. It is also a criminal offence to carry out or to permit others to carry out unauthorised works to a scheduled monument, i.e. works undertaken without Scheduled Monument or Class Consent. Where a criminal offence is suspected, English Heritage may choose to investigate with a view to prosecution or to refer the matter to the police and to the Crown Prosecution Service. A conviction for any of these offences can lead to a fine and, in respect of intentional or reckless damage or destruction of a monument, a fine and/or imprisonment.

The Class Consent 1 for agriculture and horticulture permits some existing agricultural operations to continue but excludes certain operations that may be particularly damaging to the buried archaeological remains including:

Building work, including demolition, is also excluded from this Class Consent. Where part or all of a scheduled monument is already in use as a garden, many ordinary gardening activities already taking place can continue in the same location as before without the need for SMC. Works specifically excluded include any works likely to disturb the soil below the depth of 30cm and, as with agricultural works, any sub-soiling, drainage, the planting or uprooting of trees, hedges or shrubs, the stripping of top soil or tipping operations.

The project will require Scheduled Monument Consent (SMC) for building and development works, and any planting will take account of the restrictions placed on such a site. SMC takes precedence over Listed Buildings Consent (LBC). Moreover, there is no legal requirement on owners of other historic or listed buildings to maintain them, and urgent works notices and repair notices do not apply to scheduled monuments. Ian George, inspector of ancient monuments (Historic England), has commented that:

“Where a heritage asset is both listed and scheduled the scheduling take precedence. So, in the case of these walls, the works will be controlled by SMC rather than LBC. Under listed building legislation there is also no obligation to maintain a nationally important building. However, local authorities do have powers to compel owners to repair a building deemed to be at sufficient risk that intervention is required. Indeed, a local authority can undertake works themselves and charge the cost of the works to the owner. However, as it is dual designated (as we call it) it is unlikely the local authority would take this route. The scheduling will take precedence.”

Some structures on the site are listed as grade II under the Planning (Listed Buildings and Conservation Areas) Act 1990, as amended, for their special architectural or historic interest. This means that works for alteration or extension are authorised if written consent for their execution has been granted by the local planning authority or the Secretary of State; and they are executed in accordance with the terms of the consent and any attached conditions (s.8, 1(a) & 1(b)). The project will require SMC for repair and development rather than LBC. However, planning permission for some fabric elements may be required.